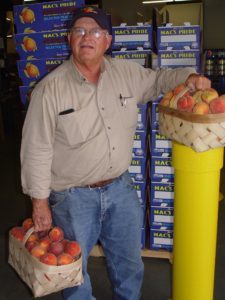 Should that happen, McLeod would be one of only three South Carolina winners in the 28 years the award has been presented. For winning at the state level McLeod, a longtime peach farmer from McBee, will receive cash, prizes and an expenses-paid trip to the Sunbelt Expo farm show in Moultrie, Ga., where the Southeastern Farmer of the Year Award will be given on Oct. 17.

Tony Melton, a Clemson Extension horticulture agent in South Carolina’s Pee Dee region, nominated Kemp for the award sponsored by Swisher Sweets and the Sunbelt Expo. “He is the best farmer I know,” said Melton, who worked for McLeod Farms in his youth and used money he earned there to attend Clemson University.

Years later, The McLeods honored Melton by funding a Clemson scholarship in his name.

Previous state honors given to McLeod include the John W. Parris Agriculture Leadership Award, the Order of the Palmetto in recognition as a Century Farm for operating more than 100 years, and an honorary state future Farmers of America degree.

Although peaches are their No. 1 crop, McLeod Farms — voted South Carolina Farm of the Year in 2011 — doesn’t stop there. They have a sizeable business in corn, wheat, rye and soybeans and a retail store that is a favorite stop for folks headed to and from South Carolina’s beaches. They also grow strawberries, blueberries, blackberries, red potatoes, cabbage, sweet corn, squash, onions, bell peppers, okra, tomatoes, peas, pumpkins, turnips, egg plants and other produce that’s sold at their roadside markets.

Read more about the 2017 S.C. Farmer of the Year Award 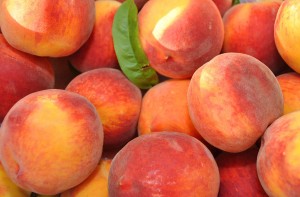 Early field reports from peach farmers across South Carolina are optimistic, but growers are still saying prayers and crossing fingers until all chances of frost have passed.

Although the outlook now is a sharp contrast from this time two years ago, it’s too soon not to worry. With peaches, a lot of things can go wrong, and growers are taking the hurdles as they come.

After delays from torrential fall rains, growers immediately began planting new trees, installing irrigation lines and pruning established orchards. But by the end of 2015 they were bracing for the possibility of a no-so-stellar crop, mainly because — long story short — deciduous trees, including peach trees, require a certain amount of “chill hours” to produce flowers and bear fruit. By the end of December, unseasonably warm temperatures had kept the number of chill hours to about 250, about half the chill time normally tallied by then. But colder weather in February helped.

Peach trees drop their leaves in the fall and go into a developmental state known as dormancy. As winter progresses, the trees enter another state called “rest.” Think of it as a bear in hibernation. While in their rest stage, trees cannot grow. Chilling temperatures are necessary for the trees to overcome the period of rest. Budbreak and normal growth occur after a peach tree has stopped hibernating. Peach trees in South Carolina require 800 to 1,000 chill hours, depending on the variety.

Thankfully, winter weather finally arrived in February and with it came enough consecutive days below 45 degrees for the trees to chill.

“Winter definitely came later than expected but once it got here, it came in with a bang,” said Kevin Rogers of Richter Produce. “Since then, we’ve had consistent highs in the 50s and lows in the 30s. We are well beyond the minimum chill hours necessary and look forward to a great peach season.”

Maybe even the best yet, said Andy Rollins, a Clemson University extension agent in the Upstate.

So far, the possibility of a plentiful crop is good but not guaranteed. And even if farmers expect a break from the recent stretch of mediocre years, they’re cautious to avoid jinxing the opportunity. April is crucial. Farmers hope this month won’t bring a late freeze, heavy frost or other conditions that can devastate delicate peach blooms. Unfortunately, that’s happened the last three years.

Despite the late frost last year, however, farmers across South Carolina still produced about 70,000 tons of peaches, second in the nation to California. Georgia finished third.

If all goes as well this year, Chappell Farms, home of “Pat’s Pride” peaches in Barnwell County will begin picking its early varieties by May 10. They are the first of Richter’s three South Carolina peach farms to begin production. McLeod Farms in McBee and Cotton Hope Farms in Monetta should begin peach production around May 15.

Sweet news, folks. Suwannee onions from the fields of Lee County, Florida have arrived, and it looks like we’re in for a huge crop. They’re the first set of sweets to ship from Generation Farms. Vidalias begin shipping in late April.

Look for the Suwannee label and get them while you can. And when you get them home, store the onions in a cool, dry spot with ample airflow. A worn-out pair of sheer pantyhose works wonders. Trust us, the hose helps protect the onions from nicks and bruises. Or store sweet onions in the refrigerator, but never in plastic bags. They’ll go bad much faster.

THE PANTYHOSE METHOD:
• Place an onion in the toe of the pantyhose.
• Tie a small knot.
• Keep going until you fill an entire leg.
•  When you need an onion, cut below a knot. 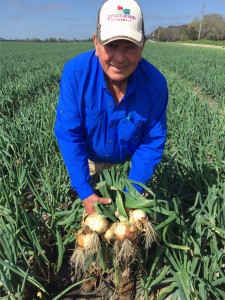 TIP:
Keep in mind that sweet onions are high in sugar and water content, and low in sulfur compounds. (That’s what causes tears when you cut an onion.) Because of these properties, sweet onions aren’t suited for long-term storage, so use them within several weeks of purchase. To extend their shelf life, wrap each onion in a paper towel or a piece of newspaper and place it in the refrigerator. Steer clear of plastic bags, however. Onions won’t keep long in stuffy conditions.

For long-term storage, sweet onions can be frozen, but because their texture changes they should be used only for cooking. Chop the onions and place them on a cookie sheet, directly into the freezer. When frozen, store the onions in plastic bags or freezer containers. If you prefer whole onions, peel, wash, core and freeze in plastic bags.

RECIPES:
Go straight to the source — The Sweet Onion Source — for a variety of ways to enjoy Suwannee sweets onions from Generation Farms.