CLEMSON, SC — Clemson University has dished out the scoop on a new dairy brand, and McLeod Farms is a major contributor. CLEMSON’S BEST™ gourmet ice cream is available in select Ingles Markets with other outlets expected to follow.

The McLeods have joined three South Carolina families to bring consumers a Certified South Carolina-grown product and a true taste of home. Farms in Edgefield and Ridge Spring produce the milk, peaches and pecans. Strawberries come from the McLeods.

Ingles is the first regional supermarket to carry CLEMSON’S BEST™, easily recognized by its purple label. Pints are available in 109 stores throughout South Carolina, North Carolina, Georgia and Tennessee. Negotiations also are underway with Lowes Foods, Food Lion and Bi-Lo, already a big supporter of the Clemson Tigers, particularly in the Upstate.

Brand officials also are working with private-label retailers that already sell Clemson Blue Cheese, the university’s first dairy product. It has developed a tremendous fan base since 1941, when Professor Paul Miller discovered the Stumphouse Tunnel near campus created the perfect environment to age cheese.

For the university’s newest gourmet product, small-batch ice cream maker Greenwood Ice Cream worked directly with the university to handcraft four Southern flavors. One is vanilla “but not just any vanilla,” said Hickory Hill’s Watson Dorn, whose Holstein cows produce milk ultra-rich in butter fat for the wildly popular Clemson Blue Cheese. “Don’t expect anything skinny under the lid, though — just a spoonful of good from some of The Carolinas’ best farmers.” Hickory Hill Milk also is non-homogenized, a rare find these days and a nostalgic return to times when a thick layer of cream rose to the top of each bottle. 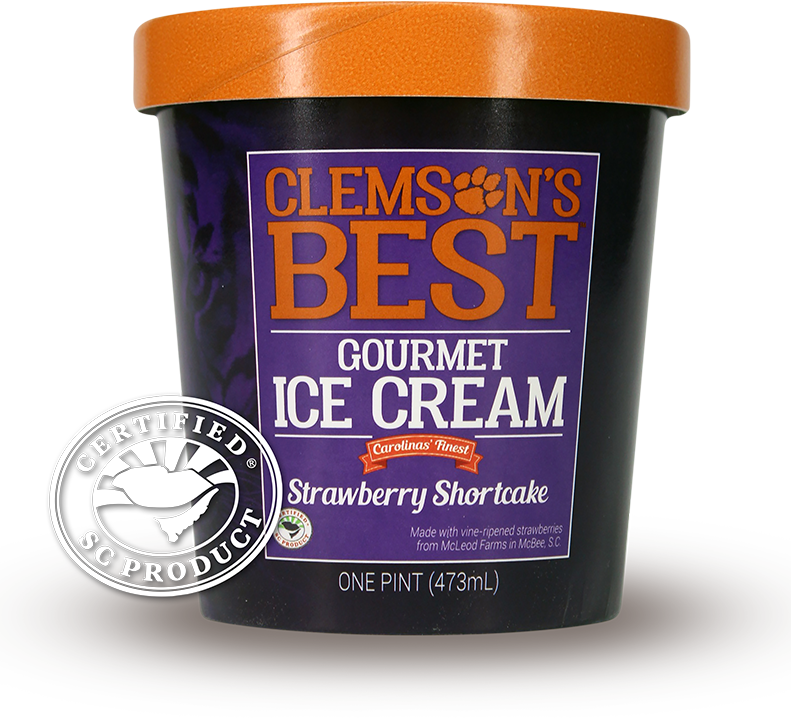 Other flavors include Caramel Butter Pecan, Peaches and Cream, and Strawberry Shortcake, so far the second most popular flavor, according to sales receipts.

Ten percent of the proceeds from CLEMSON’S BEST™ fund student-related learning, including scholarships, internships, research and campus programs in the College of Agriculture, Forestry and Life Sciences.

That is important to us,” said Brett Dalton, the university’s VP of Finance and Operations, “and it made our ice cream an easy pitch to cooperating farms, all of which are owned by Clemson graduates. Our ice cream brand isn’t about the orange and purple or the iconic tiger paw. It’s about fresh food, South Carolina farms and efforts to fund a legacy of agriculture in the Palmetto State.”

Clemson’s legacy had once belonged to Vice President John C. Calhoun, whose daughter married Green, an engineer, musician and artist. Bibliographers have written that Clemson wanted to start an agricultural college because he felt government officials did not appreciate the importance of agricultural education. Clemson Agricultural College opened in July 1893 with 446 students. They were the first class to learn the college’s concept of paying forward and giving back.
“McLeod Farms is proud to support Clemson University, South Carolina produce, and the local farm movement,” said Spencer McLeod, who works with his father Kemp — South Carolina’s 2017 Farmer of the year — to grow fruits and vegetables on land that has been with the McLeods since 1916. “We’re honored to help create a Certified SC product.”