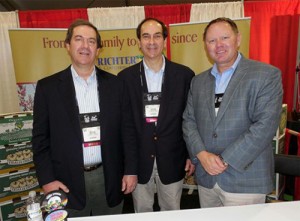 Produce distributor Richter and Co. is helping to spread the word about buying regionally with presentations at industry expos like Southern Exposure, the Southeast Produce Council’s annual Retail and Foodservice Conference.

The event in Orlando, Florida, on Feb. 26-28, drew 2,500 people, setting a record for attendance the fourth straight year. In fact, the new number left previous totals in the dust. At least 267 grower-shippers, distributors, marketers and others displayed their products during the expo. Traditionally, the turnout has been mostly from the Southeast, but attendance from the entire East Coast and even the Midwest was impressively high this year.

The event brings together members of the produce industry to connect, learn and gain a fresh perspective from retailers, growers, food service distributors, and wholesalers. Industry insiders said the turnout, which has climbed steadily over the last several years, was not a total surprise because The Southeast has become an increasingly important center for agricultural, retail and food service growth.

Richter and Company has participated in Southern Exposure since it began. The company distributes peaches, tomatoes, bell peppers, sweet potatoes and Vidalia onions to food chains across the United States, Canada and Mexico. This year is the Richters’ 86th in business, making it an icon in the agriculture industry. Today, it represents growers in Georgia, South Carolina, West Virginia and Michigan. And its longevity has helped it to become one of the world’s largest peach distributors and a major shipper of Vidalia onions.

It’s a joint effort known throughout the industry as buying regionally. Produce purchased seasonally and regionally means that, in most cases, it can be prepared and served within 48 hours of harvest. The result is healthier communities and customers. Buying regionally also ensures the sustainability of family farms, a familiar way of life for those who live in the Southeast.