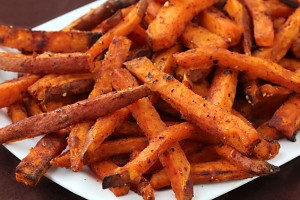 Sweet potatoes are suddenly giving their white-skinned cousins a run for their money. While we certainly can’t pinpoint exactly why, the U.S. Department of Agriculture suggests that sweet potato consumption increased nearly 80 percent between 2000 and 2014 and sweet potatoes continue to gain popularity here and abroad.

Growing consumer demand for sweet potatoes may be due to mounting evidence that they are one of the world’s healthiest foods. Sweet potatoes are higher in beta carotene than many other vegetables and are a tremendous source of potassium, fiber, and vitamins A, C and E.

Demand for U.S. sweet potatoes is rising in Europe, as well. Exports on all forms of sweet potatoes to Europe reached $92 million in 2015, up 35 percent compared with 2014, according to a news release from the American Sweet Potato Marketing Institute.

The U.S. Department of Agriculture reports that the United Kingdom was the second largest export market for U.S. sweet potatoes in 2015, after Canada. Exports of U.S. fresh and dried sweet potatoes to the UK from January through November 2015 totaled nearly $53 million, up 45 percent compared to the same period in 2014.